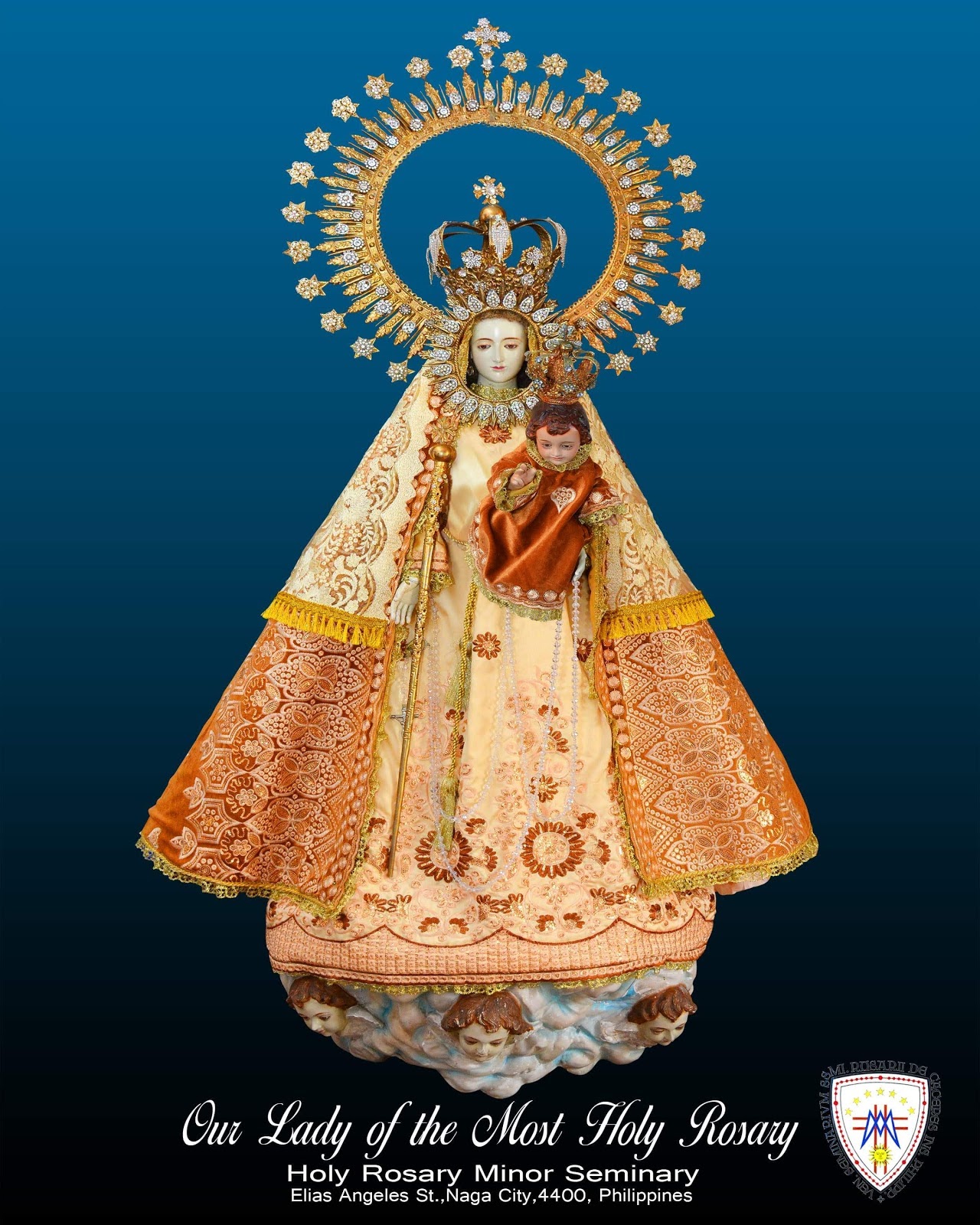 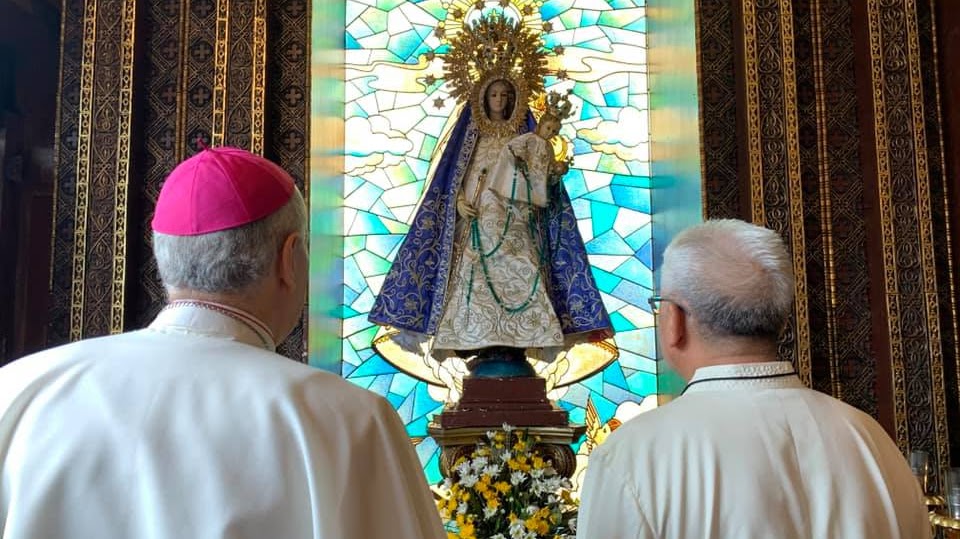 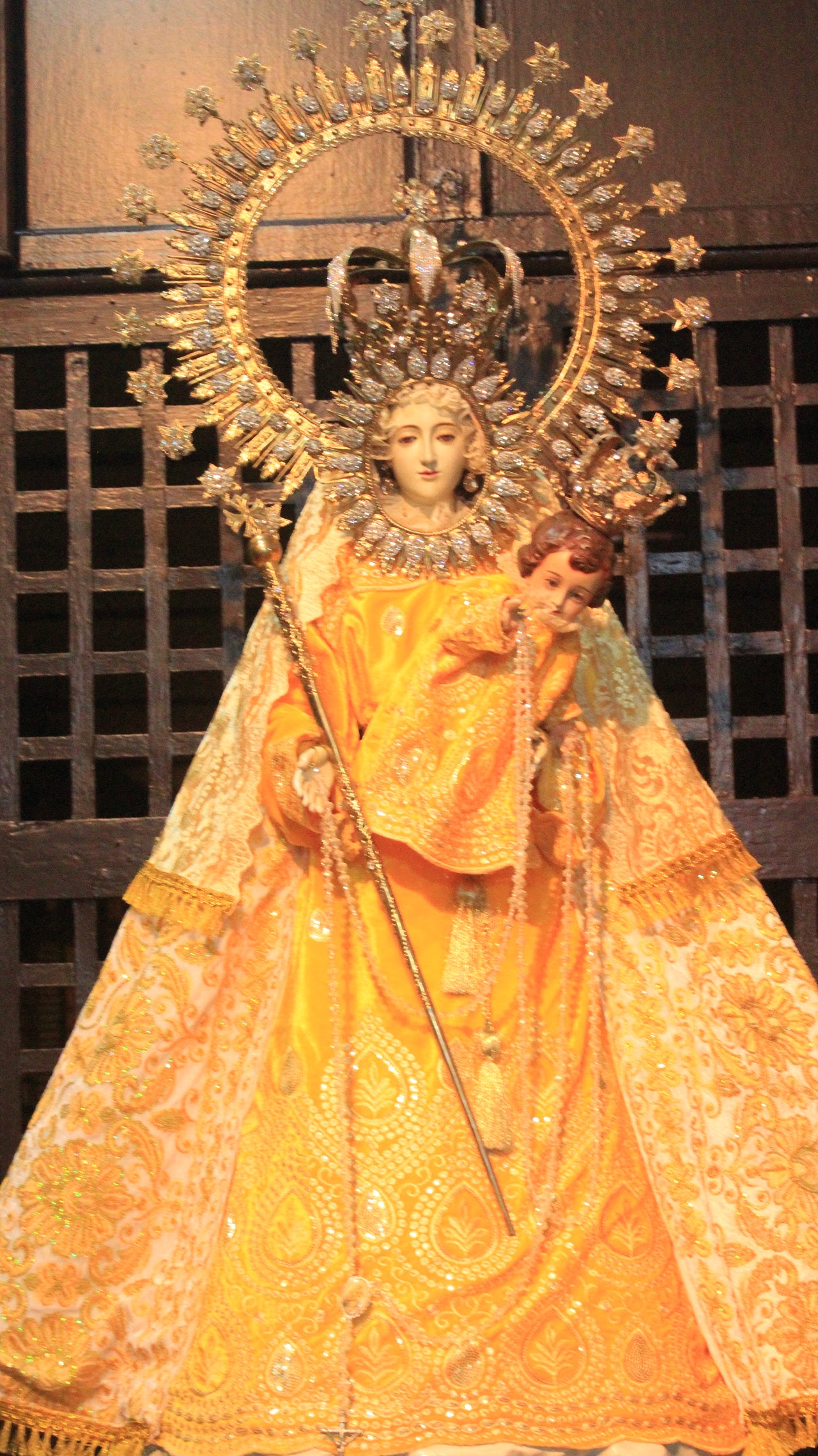 THE OUR LADY OF THE MOST HOLY ROSARY

Our Lady of the Rosary

According to Dominican tradition, in 1206, St. Dominic was in Prouille, France, attempting to convert the Albigensians back to the Catholic faith. The young priest had little success until one day he received a vision of the Blessed Virgin, who gave him the Rosary as a tool against heretics. While Mary’s giving the rosary to St. Dominic is generally acknowledged as a legend, the development of this prayer form owes much to the followers of St. Dominic, including the 15th-century priest and teacher, Alanus de Rupe.

Our Lady of Victory

In 1571, Pope Pius V organized a coalition of forces from Spain and smaller Christian kingdoms, republics and military orders, to rescue Christian outposts in Cyprus, particularly the Venetian outpost at Famagusta which, however, surrendered after a long siege on August 1 before the Christian forces set sail. On October 7, 1571, the Holy League, a coalition of southern European Catholic maritime states, sailed from Messina, Sicily, and met a powerful Ottoman fleet in the Battle of Lepanto. Knowing that the Christian forces were at a distinct materiel disadvantage, the holy pontiff, Pope Pius V, called for all of Europe to pray the Rosary for victory, and led a rosary procession in Rome.

After about five hours of fighting on the northern edge of the Gulf of Corinth, off western Greece, the combined navies of the Papal States, Venice and Spain managed to stop the Ottoman navy, slowing the Ottoman advance to the west and denying them access to the Atlantic Ocean and the Americas. If the Ottomans had won then there was a real possibility that an invasion of Italy could have followed so that the Ottoman sultan, already claiming to be emperor of the Romans, would have been in possession of both New and Old Rome. Combined with the unfolding events in Morocco where the Sa’adids successfully spurned the Ottoman advances, it confined Turkish naval power to the eastern Mediterranean. Although the Ottoman Empire was able to build more ships, it never fully recovered from the loss of trained sailors and marines, and was never again the Mediterranean naval power it had become the century before when Constantinople fell.

Pius V instituted “Our Lady of Victory” as an annual feast to commemorate the victory at Lepanto, which he attributed to the Blessed Virgin Mary.

Dedications to Our Lady of Victory had preceded this papal declaration. In particular, Simon de Montfort, 5th Earl of Leicester built the first shrine dedicated to Our Lady of Victory in thanks for the Catholic victory over the Albigensians at the Battle of Muret on September 12, 1213. In thanksgiving for victory at the Battle of Bouvines in July 1214, Philip Augustus of France founded the Abbey of Notre Dame de la Victoire, between Senlis and Mont l’Evêque.

In 1573, Pope Gregory XIII changed the title of the “Feast of Our Lady of Victory” to “Feast of the Holy Rosary”, to be celebrated on the first Sunday of October. Dominican friar Juan Lopez in his 1584 book on the rosary states that the feast of the rosary was offered “in memory and in perpetual gratitude of the miraculous victory that the Lord gave to his Christian people that day against the Turkish armada”.

In 1671 the observance of this festival was extended by Clement X to the whole of Spain, and somewhat later Clement XI, after the victory over the Turks gained by Prince Eugene in the Battle of Petrovaradin on 5 August 1716 (the feast of Our Lady of the Snows), commanded the feast of the Rosary to be celebrated by the universal Church.

Leo XIII raised the feast to the rank of a double of the second class and added to the Litany of Loreto the invocation “Queen of the Most Holy Rosary”. On this feast, in every church in which the Rosary confraternity has been duly erected, a plenary indulgence toties quoties is granted upon certain conditions to all who visit therein the Rosary chapel or statue of Our Lady. This has been called the “Portiuncula” of the Rosary.

Pius X in 1913 changed the date to 7 October, as part of his effort to restore celebration of the liturgy of the Sundays. In 1960 under Pope John XXIII it is listed under the title “Feast of the Blessed Virgin Mary of the Rosary”; and under the 1969 liturgical reforms of Pope Paul VI “Our Lady of the Rosary” is mentioned as a mandatory memorial.